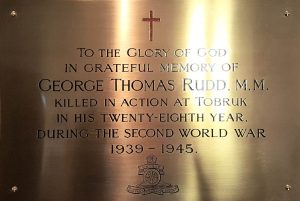 George Rudd’s great grandfather George Robert Rudd and his great grandmother Jane Rudd lived in East End Cottages, Ellerker and are buried in Plot A Grave C1 in St Anne’s churchyard. George Thomas Rudd was born in 1914, the son of Dorothy Rudd who later married Henry Moat. George served as a sidesman at St Anne’s.
George Thomas Rudd (known to his friends as Tot) joined the Royal Horse Artillery and was posted with J Battery 3rd Regiment RHA to North Africa to counter Rommel and the Afrika Corps. Rommel needed to capture the port of Tobruk to bring in supplies for his army but the port was defended by Australian troops with British support. The Germans mounted a number of attacks on Tobruk and it was during one of these that Bombardier Rudd won his Military Medal. Originally recommended for a “Mention in Dispatches” the award was upgraded to the Military Medal. The citation from Lt.Col. C P B Wilson commanding 3rd Regt RHA reads as follows:
On 14/4/41 “B” troop “J” Battery RHA was in action near post 32 in the Tobruk defences. At about 0700 hours the troop was attacked and surrounded by about 30 enemy tanks and came under very heavy fire from machine guns and tanks.
Bombardier Rudd who was a spare NCO and was at the entrance to Coy HQ dugout saw a wounded gunner, who was the only survivor of his gun, crawling across the open ground which was swept by enemy fire. He immediately left the dugout, ran across to the wounded gunner and brought him under cover. By his prompt and gallant action Bombardier Rudd set a fine example and saved his comrade’s life.

On the 30th April 1941 the Germans mounted a very heavy attack supported by an artillery barrage and Bombardier Rudd was killed. His body was never found but he is commemorated on the Alamein Memorial which is just outside the village of Alamein about 130 km west of Alexandria.

George Rudd’s medals were sold in 2014 and the proceeds kindly donated to St Anne’s Church. 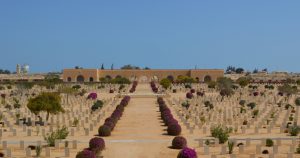 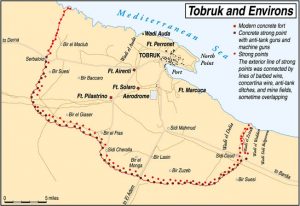 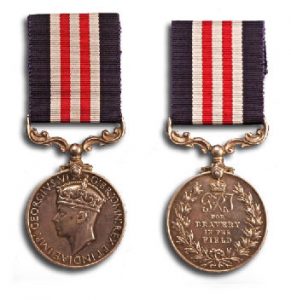