The Ellerker Village Summer Fayre and Beer Festival will take place on Saturday 18th June 2022 – All are welcome! 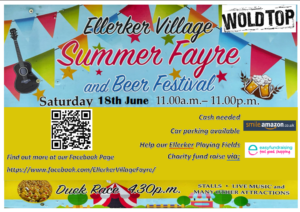 All proceeds from the event go to the charity that run the playing fields, keeping them and the equipment in good working order for all to enjoy.
Another way to contribute is to choose us as your easy fundraising or amazon smile charity to donate gift aid to (at no extra cost to yourselves!).

King George VI’s sudden ascension to the British throne in 1936, and the speech therapist who helped him overcome his stammer.
Admission only £5

T’Challa, the new ruler of the modern kingdom of Wakanda, must defend his land from being torn apart by enemies from outside and inside the country. This thrilling film was awarded four Oscars and a BAFTA.

A cowboy toy is profoundly threatened and jealous when a fancy spaceman toy supplants him as top toy in a boy’s room. Toy Story can hold its head high, boasting of two Oscars, two Oscar nominations, and three BAFTAs.

Set in 1987, during Thatcher’s austere Britain, this is a joyous, coming-of-age story about a teenager who learns to live life, understand his family and find his own voice through the words and music of Bruce Springsteen. “Blinded” won or was nominated for a dozen awards at film festivals.

In the pre-Civil War United States, Solomon Northup, a free black man from upstate New York, is abducted and sold into slavery. The film won two BAFTAs and a half dozen Oscars, including Best Motion Picture.

Ellerker Parish Council has a vacancy for a co-opted Parish Councillor. No specific qualifications are needed and the most important requirements are to have a keen interest in Ellerker and to be prepared to play an active part in the Council’s work. Initial training for all new councillors is available as well as regular ongoing training opportunities. Councillors are required to attend the Bi-monthly Full Council meetings. The term of office for the vacancy will run until the next ordinary election which is in May 2023.

To apply for the post, please send a short E mail (maximum 600 words) to the Clerk to the Council, Alan Barker at   covering:

If you would like to talk through the role of a councillor, please contact the Parish Clerk or speak to Claire Wood (or E Mail )

The closing date for applications is 10th June 2022

Co-option will take place on Thursday 7th July 2022 at 7.30pm in the Full Council Meeting at Ellerker Village Hall, where you will be asked to address council for no more than five minutes to expand on your written submission. 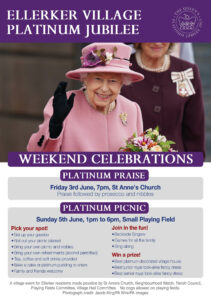